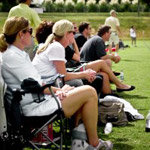 Too often well-meaning parents live through their children and expect their kids to take on their own dreams and goals. As a youth soccer coach in Portland, Ore., Sue Mak confesses that she found herself too emotionally involved at times in her son’s athletic experience. She often yelled if her son was in danger or if referees failed to watch for fouls, she says.

“If someone would jump on my son, I would say, ‘Open your eyes. You almost killed my kid.’ If I saw a kid fouling another player, I would yell, ‘Ref, watch what’s going on!’ ”

When Mak’s son, Justin, was about 12, he told her that she embarrassed him when she challenged referees’ calls.

“I realized I was overzealous, so I tried to tone it down.? I tried to back off,” she says.? “I tried to find a way to still be involved in the game but to be a real positive part of the excitement,” Mak says.

Parents, like Mak, must learn to strike a delicate balance between being overly involved in their kids’s sports activities and not showing enough interest in their athletics.?

Coaching From the Sidelines: A Common Parental Error

Too often, well-meaning parents live through their children and expect their kids to take on their own dreams and goals. They evaluate their child’s success or failure based on his or her performance–not his or her happiness. They are overly critical. And, like Mak, coach too much from the sidelines.

Says Lauren, a 12-year-old who plays soccer, Lacrosse, basketball and tennis in Portland, “The major problem affecting my confidence is my parents. Dad’s cheering embarrasses me. Just before I shoot in soccer, he yells, ‘Pull the trigger!” It’s so awful.”

Rather than expressing enthusiasm by coaching from the sidelines and criticizing, parents need to take a step back. Try to understand why your child takes part in sports. Does he or she play to be with friends? Does your child play because she loves to be part of a team? Or does she enjoy competition?

Once you understand your child’s motivations, try to support his or her interests. Ensure he or she has the opportunity to spend time with teammates, to feel like part of a team, and to have fun.

Kids who excel in sports are those who are passionate about it. And their drive comes from within-not from their parents. They’ll beg you to bat balls in your front yard with them, to rebound while they shoot baskets and to kick a ball in the neighborhood park. You don’t ever have to nudge these kids into practicing.

You’ll also help your children enjoy sports by telling them they’re doing a great job-whether they win or lose. Keep the focus off performance. Concentrate on fun, enjoyment, laughs!

It’s also important to attend kids’ games, whenever possible. Cheer them on without pressuring them. Try to be supportive of coaches, referees and umpires. It’s important to set a good example-even if you don’t always agree with the coach, referee or umpire.

As Mak says, “Good sports parents realize this sport is a tool to teach your child about life.”

Coaching From The Sidelines:? Striking A Balance

As a rookie soccer coach 20 years ago, Mak struggled to find a balance in how she gave feedback to her team. After experimenting with a number of styles, she discovered that children benefit most if they receive mainly positive feedback. Her job, she decided, was to be a master cheerleader.

If you, too, learn how to be a master cheerleader, your children will experience many benefits. They’ll have more fun, learn important life lessons, and likely stay involved in sports for a long time. Remember, 75 percent of kids drop out of sports by the time they are 13. That’s because they’re no longer having fun!