Taking Skills from Practice to Competition

Trust is one of the most important factors that leads to peak performance in sports. When young athletes trust their skills, they’re performing or playing in the moment. They rely on the skills they learned to perform to their abilities under any circumstances. Rather than thinking or analyzing, they’re just doing.

For example, a baseball player who has trust in his ability at the plate believes he can make solid contact with the ball and put the ball in play.

Trust doesn’t mean the player won’t strike out occasionally, nor does it mean he will get a base hit every time. Trust means the player can swing freely and rely on his training to produce at the plate.

If kids lack trust in their game, it can undermine their performance.

They feel anxious and play tentatively. Uncertainty about what will happen during the game can spur kids to experience fight-or-flight reactions. Their hearts may pound and they may miss opportunities, make poor decisions and make uncharacteristic mistakes.

On the other hand, if kids trust their skills, they’re more likely to perform well. They can play intuitively; they’re almost on autopilot. They compete with focus but aren’t trying too hard to “make it happen.”

When kids trust their game, they also play in the moment and don’t think about what might happen or analyze what they’re doing. They play intuitively. Their movements are fluid and efficient. They’re immersed in the flow of the game. The game slows down, and action unfolds in front of them.

To achieve this level of trust, kids need to understand the importance of physical and mental preparation. They need to prepare as if it matters and understand that every drill or repetition is important. They need to give their full attention to doing even the smallest things during training.

Then, when it’s time to complete, sports kids know they have done everything possible to prepare. They let go of expectations and perform in the moment.

Philadelphia Sixers center Joel Embiid has slowly developed trust in his game. It shows; he has led his team in scoring during the 2021 playoffs. In fact, some considered him to be the league’s most valuable player.

“I’ve come a long way, but I feel like this year the game just slowed down for me. The way I see the floor is completely different than previous years,” he said. “I just try to make the best play possible. Even if I got to get a shot up myself, there’s so many ways I can do it.”

As seen in Embiid’s play, trust is the key to peak performance. Trust begins with putting in hours or repetition in training. The more repetition, the more kids refine the motor aspect of movement.

When kids compete, they need to remind themselves that their practice time is over and it’s time to trust what they have learned. They could repeat to themselves, “Use the skills I have today–make it work.”

In addition, kids need to resist the tendency to analyze mistakes and try to fix their techniques during competition. Save the changes for the next practice!

With trust come many benefits in sports. Help your sports kids develop trust in their skills. 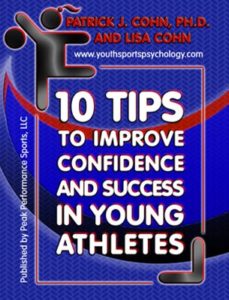