Intentionally or not, all teams have a culture.

While cultures are usually not created intentionally, the impact of the culture is far reaching.

But what is team culture?

“The culture is how it feels to be involved with the team,” says Mark Lawton, a longtime teacher and coach who has led numerous teams to the championship level.

“How the team feels about and interacts with the coach. Do you want the culture to be one that is serious and goal-oriented or do you want it to be more upbeat and fun?”

When it comes to creating a team culture, numerous questions can arise about fairness, styles of play and how athletes dress, he says.

Coaches, with the help of parents, need to address these issues.

For example, parents and coaches may want to create a culture that appreciates all that can be learned from mistakes.

To accomplish this, coaches could actively talk about mistakes and run drills specifically meant to encourage kids to make mistakes and move through them. They should enlist the parents to help them instill this idea in sports kids.

It’s much easier to instill these values at the beginning of a season, rather then trying to create them later, Lawton says.

One real-world example of the benefits of team culture is San Antonio Spurs coach Greg Popovich.

He cultivates a culture of family, telling all of his assistant coaches to “hug ’em and hold ’em” (meaning the players) as much as possible. He believes in telling his players that they are part of the group, and he believes that every one of his players can meet the group’s high standards.

This consistent culture has created consistent play. The San Antonio Spurs have won five championships with a .713 winning percentage and 20 consecutive winning seasons.

“You need to define the culture very early, but then after a week or two I like having a team meeting where we can solidify the team culture, even though I wouldn’t say it in those terms to the kids. Personally, I like a team culture of doing well and having fun,” says Lawton.

He stresses that while it’s important to create a culture at the start, it is equally important to be consistent about it.

“You have to be clear with your expectations and then you need to be clear in your implementation of that. A lot of coaches may lay down their expectations but not stick to them, which doesn’t help cultivate culture at all.”

Listen to our interview with Lawton here: 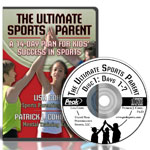 Do your young athletes:

If so, check out The Ultimate Sports Parent!

The Ultimate Sports Parent will teach you powerful mental toughness secrets to improve your child’s success in sports.

The Ultimate Sports Parent: a 14-Day Plan For Kids’ Success in Sports

What are sports parents saying about our mental training program?

“We really enjoy your emails and are grateful that we found your web site. It is so needed. There really isn’t much out there to guide parents. Thank you for your work. And yes, we have passed on your web site to numerous parents.”
~Debbie and Peter Cooney

“After listening to your podcasts and reading your free e-book, most of the challenges apply to my 14-year-old son. He’s got all the physical ability, but unsure of himself in games. He has a difficult time rebounding from errors, the screaming coach on the side, along with his uncle in the stands probably doesn’t help his confidence. So reading and listening to your information has been so helpful and validates what I have observed in him for the past few months. Thank you so much!”
~Brenda Felder, Everett, WA

Young athletes and their parents and coaches tell us that sports kids often struggle with these pregame mental game challenges:

“10 Minute Pregame Prep” will tell you everything you need to know about ensuring your sports kids avoid classic mental game pitfalls before a game, learn how to trust their instincts, and just go for it. It provides lots of advice for you, too…

With our program, you can stop wondering what to do and relax before your kids’ games!

Don’t forget to get your FREE download (located in the middle of the page) of Lesson 1 from the Parent’s Manual!

Sign up for our free report to receive weekly emails and tips:

“10 Tips to Improve Confidence And Success in Young Athletes”