Frustrated parents and coaches of young athletes contact us everyday about their kids’ inability to handle mistakes or cope with imperfection in sports. As a matter of fact, 43% of sports parents and coaches we surveyed agreed that kids struggle to let go and stay composed after mistakes.

For this reason, we have an exciting new Workbook and CD program for parents, coaches, and their young athletes–available at the end of the week!

However, you can preview our new program, The Composed Sports Kid, by watching the video below.

Learn how to help your kids cope better with frustration today!

In this short video, you’ll:

How to Help Young Athletes Cope with Frustration [Part 3]

Want more videos from this series?

Watch video 1 and video 2 in this series!

1. How Young Athletes Become Frustrated – A Model for Parents and Coaches

Help Your Young Athletes Let Go of Mistakes and Cope With Frustration! 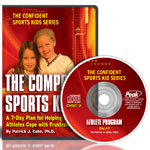 Do your sports kids throw tantrums, cry and/or lack emotional control in competition?

Do your sports kid shut down or act like the Incredible Hulk after they make just one mistake that no one notices?

Are you fed up with your young athletes’ self-destructive behavior?

Check out: The Composed Sports Kid

The Composed Sports Kid system is 2 programs in one.

What are parents and coaches saying?

“He Has Really Benefited From The Program”

“I recently purchased The Composed Sports Kid CD program for my son Jonathan who is 10.  He is a skilled soccer player that was having issues with loss of control on occasion during games. He has really benefited from the program. He carries himself much better these days and even talks about his composure after the game to me before talking about the goals that he scores.”
~Dave, Sports Parent